Already have an account?
Home › Splendour in Peril: the Notre-Dame de Paris...

“One cannot but regret, cannot but feel indignant at the innumerable degradations and mutilations inflicted on the venerable pile, both by the action of time and the hand of man.”

The Hunchback of Notre-Dame

On the evening of April 15, 2019, the world watched in horror as a roaring fire engulfed the 850 year old wooden roof of the jewel of medieval Gothic Catholic architecture – the Notre-Dame de Paris, while undergoing renovation and restoration. It burnt for 15 hours in which the cathedral sustained serious damages, including the destruction of the timber spire over the crossing and most of the lead-covered wooden roof above the stone vaulted ceiling.

Built between the 12th and 14th centuries the Notre-Dame Cathedral is also called Notre-Dame de Paris (“Our Lady of Paris” in French) is the official seat of the Archbishop of Paris. Dedicated to the Virgin Mary, the Notre-Dame is located on an island on the Seine River called Ile de la Cite. For centuries the cathedral has witnessed weddings of France’s kings and queens as well as funerals of many Presidents of the Republic like Charles de Gaulle and François Mitterrand. Napoleon I was crowned emperor in Notre-Dame in 1804, when in an interesting turn of events the emperor at the last minute snatched the crown from the hands of Pope Pius VII and crowned himself. The church also saw the joyous thanksgiving ceremony after the Liberation of Paris in 1944, led by Charles de Gaulle. Visited by more than 13 million visitors every year, it enjoys the status of being a minor basilica as one of the largest and still functioning Catholic churches. It is also a keeper of many religious relics including the Crown of thorns which is the wreath of thorns that was placed on the head of Jesus Christ at his crucifixion.

In 1160, Maurice de Sully, the Bishop of Paris, ordered the construction of a newer and much larger church i.e. the Notre-Dame, in order to replace an already existing Romanesque cathedral. He deemed the church that already stood in the location unworthy of the prestige of his position. The construction of Notre-Dame began between 24 March and 25 April 1163 with the laying of the cornerstone in the presence of King Louis VII and Pope Alexander III. Maurice de Sully died in 1196 while the cathedral was still being built. Construction continued for years, with many bishops and architects making their mark on the seemingly never ending building process. The fact that so many people had a part in building Notre-Dame is what accounts for its unique and varied design. The most significant change came in the mid-13th century when the transepts were remodelled in the latest Gothic Rayonnant style, characterised by the radiating style of the spectacular rose window. The construction was finally completed in 1345.

From primitive Gothic in the 12th century to its restoration by Eugène Viollet-le-Duc in the 19th century, through the radiant Gothic of the 13th century and the flamboyant Gothic of the 14th century, Notre-Dame undoubtedly arises from centuries of work and multi-faceted inspiration. The architecture of Notre-Dame follows the golden ratio, i.e. any shape composed of a square and a rectangle, and their combined dimensions should roughly correspond to a ratio of 1:1.61, the ratio of perfection in art. Some of the most well known architectural wonders of the world that follow the golden ratio include the Parthenon in Athens and the Taj Mahal in Agra.

Designed in the French Gothic fashion and, the Notre-Dame Cathedral is one of the first examples of the use of flying buttresses and sculptured facade. The cathedral features numerous statues and stained glass windows. The cathedral is home to one of the oldest surviving wood-timber frames in Paris, made from 52 acres of trees that were cut down in the 12th century. Each beam is made from an individual tree. For this reason, the lattice of historic woodwork is called "the Forest." Major components that make Notre-Dame unique include one of the world's largest organs and its immense church bells.

The imposing Gothic cathedral is 130 meters long, 48 meters wide and 35 meters high. The pillars are up to 5 meters in diameter. The towers are 69 meters high comprising of 368 stairs to access the top. The western facade of the church is almost square. It is 41 meters in length and 43 meters high (excluding the towers). It is comprises of the portals, the Kings' gallery, the large rose window, and the large pierced gallery above the rose window that links the two towers.

The interior of the church built, rebuilt and renovated over different moments of time is one of the most magnificent and beautiful to have ever built by man. The nave has five double bays topped by six-part vaults bordered with large cylindrical pillars. It is flanked by double-sided aisles, a 48 meters long transept, and a chancel. The transept's spire, rebuilt in 1860 in the style of the 13th-century one that was destroyed during the Revolution, is made of oak covered with lead and weights 750 tons.

Amongst the other fascinating features of the Notre-Dame are its famous stained glass windows or the rose windows. Most famous among these rose windows is the three rosettes motif seen in Rose South or Rose du Midi. Overlooking the Seine, it sits on the facade of the transept. It was offered by King Saint Louis and was built in 1260 by Jean de Chelles, then Pierre de Montreuil. It is one of the largest rose windows ever built in that period. Two other large rose windows are also located at each end of the transept.

Since the Notre-Dame was conceived to serve as a liber pauperum, a "poor people's book" for the vast majority of parishioners who were illiterate, the exteriors of the Gothic cathedral is covered with sculptures vividly depicting biblical stories, monsters and demons, mythical beings and animals, medieval science and philosophy, and esoteric knowledge. A typical element of Gothic art, Chimeras and gargoyles are well represented on the walls of Notre-Dame. This menagerie of grotesques and stone creatures were intended to protect the church from malevolent spirits. While gargoyles are hollow statues located at strategic locations to ensure water drainage, chimeras are purely decorative elements. Though representative of medieval artistic style, the present day chimeras (including the most famous ones in the Gallerie des Chiméres) and gargoyles of Notre-Dame are not medieval but modern day constructions created in the mid 19th century by Viollet-le-Duc.

Another major architectural element of the cathedral is the flying buttresses, constructed around its nave in the 12th century. It was felt that the incredibly tall church needed more light, thus larger windows and thus greater supports to its pre-existing thin walls. The architects designed single-arch buttresses to prevent the walls being pushed outwards under load. The exposed flying buttresses became an iconic aspect of Gothic design setting a major trend in sacred architecture.  In addition to the flying buttresses, over a dozen supporting piers were constructed to support the exterior walls and counteract the lateral thrust of the nave vaulting.

Of Notre-Dame’s many Organs and Bells

The musical and liturgical life of the cathedral is made up of the three organs including the Great Organ, the Choir Organ and a Positive Organ, and the bells.  The Great Organ with five keyboards, one hundred and nine plays, and nearly eight thousand pipes, is without a doubt the most famous in the world.

The south tower houses the heaviest of the bells or the bourdon that was nicknamed by King Louis XIV as "Emmanuel". The other important ones are known as Gabriel, Anne-Geneviève, Denis, Marcel, Etienne, Benoît-Joseph, Maurice, and Jean-Marie. It weighs 13 tons and its clapper weighs 500 kgs. The bell rings only on the church's main liturgical feats and for exceptional ceremonies. Since 1856, the north tower houses four other bells that replaced the ones dating from the Middle Ages that were sent to the foundry in 1791 to make cannons.

A Witness to Mankind’s Worst Follies

No stranger to desecration and destruction, the Notre-Dame has withstood the ravages of revolutions, wars, vandalism, alleged bombing attempt and even restoration! Amid the fervour of French Revolution in October 1793, antiroyalists forced their way into the cathedral’s Royal Gallery, and pulled down statues of what they thought were kings. Its bells were melted to manufacture artillery, and the lead in its roof was pillaged for bullets. A major jolt came in the form of a radical ‘restoration’ exercise ordered by Louis XIV. The rood screen, studded with sculptures, was pulled down. The stained glass windows from the 12th and 13th centuries were replaced with clear glass. A pillar of the central doorway was demolished to allow grand processional carriages to pass through. It also suffered damages during the Napoleonic wars and later during the Second World War, where it is speculated that Hitler had earmarked it to be razed down. The liberation of Paris in August 1944 caused some minor damage to the cathedral from stray bullets. Some of the medieval glass was damaged, and was replaced by glass with modern abstract designs. Increased levels of air pollution has resulted in the deterioration of stone masonry of the cathedral’s exterior and accelerated erosion of decorations.

An inseparable part of Parisian culture, history and life, Notre-Dame has been accepting the people’s reverence one day, and then facing their rejection on another. Its topsy-turvy saga is not an isolated tale of one monument but a painful oft-repeated story on a loop where we have seen important milestones of human history, marvels of art have been wiped out from the face of earth. One faction’s over zealousness or another group’s complete apathy has caused destruction of many cultural heritage and historical sites such as Bamyan Buddhas, the city of Aleppo, Leuven University Library, Mosques of Bosnia or the total annihilation of Old Bucharest at the hands of Nicolae Ceausescu. There are many more waiting to fall as their resilience is being challenged by either violent extremism or climate change and rising sea levels.  It won’t stop until us as citizens of the world understand that Heritage is not merely a piece of art or a building, it is a consciousness and a responsibility. For humanity to thrive it is essential for heritage to survive as it defines our place in the world, and helps us to respect and understand one another. 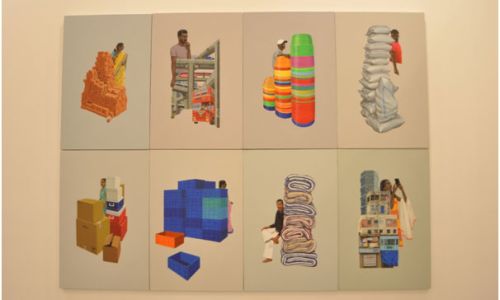