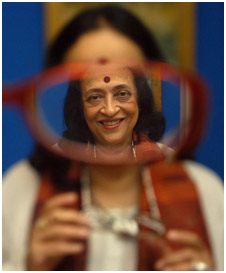 Padmashree Anjali Ela Menon is India’s leading contemporary artist. She is known for mastery over translucent textures using thin glazes over masonite. Born in 1940 in Bengal, she took up art in her school time and already sold a few paintings by the age of 15 and held a solo exhibition by the age of 18.

She briefly studied at J J School of Art and later graduated in English literature from University of Delhi. Menon received a scholarship from the French government to study at the Ecole des Beaux Arts. The preferred medium of her paintings is oil on masonite. But her works include other mediums such as computer graphics and Murano glass.

If there is one word for Anjolie Ela Menon’s career spanning over six decades, it is experimentation. This is also the reason why it is difficult to compartmentalize Menon’s work. Her work has constantly evolved since the beginning. She has experimented with various mediums, themes, motifs, etc. She is described by many for being maverick and Menon is more than happy to not fit into any one category. Anjolie Menon is quoted as saying, “I am neither a didactic nor narrative painter. I am hardly concerned with events, though I like to lay my people bare – I like to bare them a bit beyond what is decent, sometimes ripping open a chest to reveal the heart beating within. Of course, there are many who have identified with the women I paint, especially those who are trapped or sitting alone on a chair, or those innocent ones with a newly-awakened sensuality, and those who are waiting” 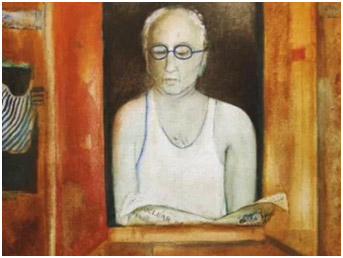 Looking out of windows by Anjali Ela Menon

The beginning of her works has been attributed to the modernist style in the 1950s. She was influenced by a varied range of artists such as M F Hussain, Van Gogh, Amrita Shergill, Modigiliani and her canvas was dominated by thick flat areas of bright colours with sharp outlines. As time passed, her work has undergone tremendous change as well. There is a sense of melancholia to her paintings. They are inspired by the photography of earlier times. Photographs were used to be taken at only important events and people used to pose in a purely still manner for them. In the painting, Looking out of windows, the similar style could be seen. The old man is standing at the windowsill with the newspaper in a very still and expressionless manner. There is infact a serene feeling to this painting. This series of paintings on the stillness and window theme were made from the photographs Menon found in the palace collections in Calangute (her husband’s hometown). 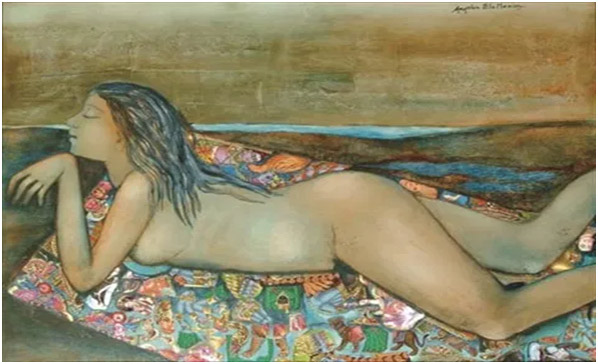 Another theme in her paintings are the nudes. Bright colours and a dynamic palette is incorporated in the canvas and influenced from her studying Romanesque and Byzantine art in the 1960s. Though early Christian and Byzantine art were painted on wood, Menon developed an unique method where she replaced wood with masonite. It was done for practical reasons since it is a better substitute for wood with better durability. The female form through symbolism of Eden is frequently revisited in her work. The eyes of Menon’s nude are darkened or closed or a downward gaze depicting serenity. It is also a reminder that women have been paramount in shaping our collective cultural and spiritual identities. Eden depicts the unmistaken Eve who has taken the apple’s bite with serpent in the foreground while Nude places Eve in a contemporary landscape of beach where the serpent is replaced by the cat. 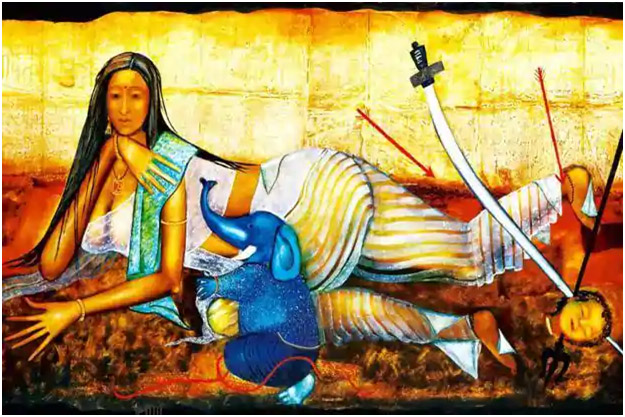 Parvati by Anjali Ela Menon from the Divine Mother series

The role of mother in mythological stories is another important theme for her. The above painting Parvati depicts the birth of Ganesha. While the life force of the young boy is revived after the elephant’s head, the painting is depicting the young boy seeking love from his mother as well as with the depiction of the severed head laying at her feet is witness to the pain and anguish the mother must have faced. Menon finds the aesthetics of mythology interesting. 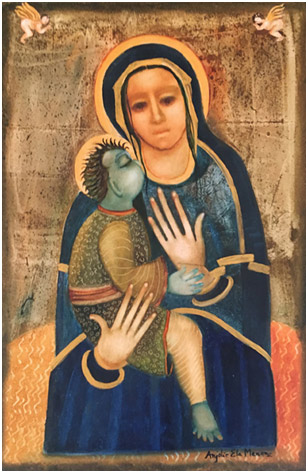 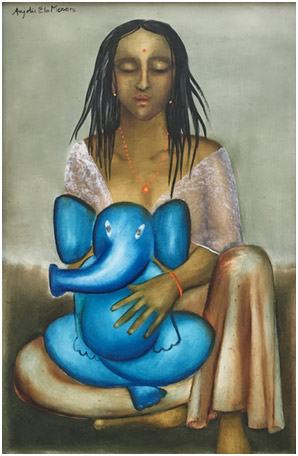 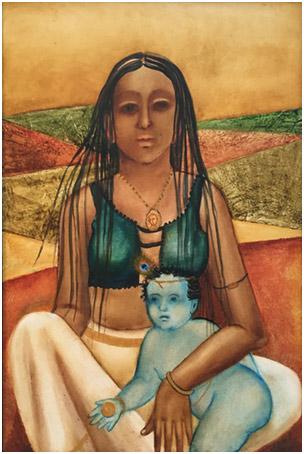 The above paintings are from the Divine Mother Series (2016-2017). In both of the paintings, the mothers are represented in a similar fashion, with their free flowing hair, bare arms and a simplistic allure in contrast to the most revered Hindu gods Ganesha and Krishna in a striking contrast to their mothers. Menon works from her studio in Nizamuddin in New Delhi, and the women and children from this basti also turned out to have resemblances to her painted figures. Hence, bringing a familial context to these religious imageries.

In an interview with DNA, Menon said, “Whether the Virgin Mary or Maya. I always define shakti as 'woman power'. The western view of feminism tries to appropriate male power, but Indian women have a strong sense of power that was not physical but (based) on sacrifice and fecundity. To not only produce, but nurture; important for universal balance. Therefore, we have such strong images of Durga and Kali in India. But the irony is that in India, women are still treated badly. Often, those nasty to women are women themselves with their draconian customs and ritual, almost like an act of revenge” 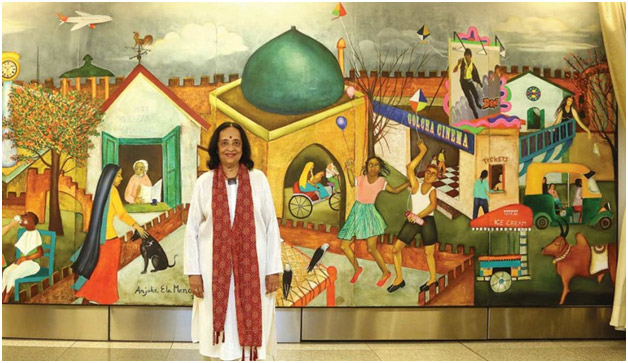 Anjali Ela Menon has made significant contributions to the field of contemporary art in India. She has a spiritual relationship with art. The very process of creating art is like a riyaaz for the artist. Recently with the lockdown in place due to the Covid 19 pandemic, Anjolie, along with other artists have joined the #ArtForHope series by Art Alive Gallery. It is an initiative to use the ability of art to heal to bring hope and positivity to heal in this difficult time.