Already have an account?
Home › Modern Art in India: The Legacy of Progressive Arts’ Group...

India in the 1900s was already experiencing a changing landscape in the Indian Modern Art scene. With the East Indian Company expanding to the rest of the country, European art became increasingly available and sought after by the Maharajas and the Nawabs of India. As the European artists found patrons in the affluent sections of our society, art supplies also became easily accessed by artists making locals artists adapt to the medium of oils on canvas.

The beginning of what we call the ‘Indian Modern Art Movement’ found its ground in India as Abanindranath Tagore and Ernest Havell set up the Bengal School of Art in Calcutta. In the heat of the Indian National movement against the British rule, they rejected the teachings at the Calcutta Government College of Art, The Bombay Government Art College and the Madras Government College of Arts & Craft as these colleges specialised in training Indian artists in the European styles like naturalism, perspectives, portraiture, landscape and still life. Instead, Tagore and his colleagues strived towards defining India and ‘what it meant to be an Indian’ by retracing the history of our region and used motifs from our old scriptures, temple frescos, cave paintings and Mughal painting styles. Some of the work generated by renowned artists from the Bengal School were Abanindranath Tagore’s Arabian Night series, Gaganendranath Tagore’s ‘Reform Screams’ caricatures, Rabindranath’s and Sunayani Devi’s primitive art, Nandalal Bose’s ‘Haripura Posters’, Benode Bihari Mukherjee’s murals and Ram KinkarBaij’s sculptures.

The Bengal School of Art was set up in the 1900s and was at its peak in the 1920s only to decline in the 1930s. It was during this time that a group of theatre professionals and writers, visual artists who identified with leftist ideologies emerged. They called themselves the ‘Progressives Artists’ Group’ (PAG) and had a secular vision for the country which was pluralistic unlike Bengal School of Art. The members of PAG were inspired by European Modernists such as Paul Cézanne and Pablo Picasso and painted in styles such as Expressionism, Surrealism, Cubism, and Primitivism thus beginning the period of Indian artists experimenting with global modern art styles. Artists such as F. N. Souza, S. H. Raza, K. H. Ara, M. F. Husain, S.K. Bakre and H.A. Gadewere founding members of the PAG.

Francis Newton Souza was the first to raise eyebrows from Indian and International art community for his work on nudes and religion. Born to a Goan Catholic family in Panaji, he had immense interest in themes and motifs in Catholicism. He was also revered for his representation of the female nude and the dichotomy between good and evil in his works.

Souza had an artistic and a rebellious streak in him since his younger days. He went to St Xavier’s High School where he developed an interest in drawing studying oleographs, prints and pictures imported from Europe. However, he was kicked out of school at the age of 15 for drawing pornographic images in the school lavatories among his other antics. He then joined Sir J. J. School of Art in Bombay but soon got suspended for taking part in the Quit India Movement. On the day of his suspension, he created his first piece called the “Blue Lady”, which was soon exhibited and bought by Dr Hermann Goetz for the Baroda Museum. And so, Souza’s journey began.

Souza’s shot to fame, however, came from his later works in London, to where he had moved in 1949. After struggling for six years in Europe, he had finally scored a solo exhibition in 1955 with Victor Musgrave’s Gallery One after which his career took off. Today his most profound works are his sketches of Portuguese Goan landscapes painted with watercolours and a series of ‘black paintings’ where he again explored the themes of nudity and religion. 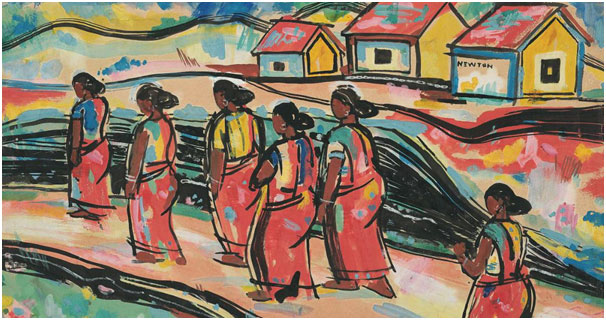 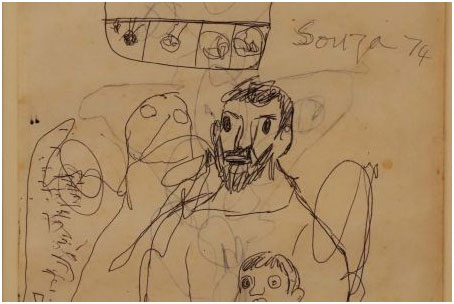 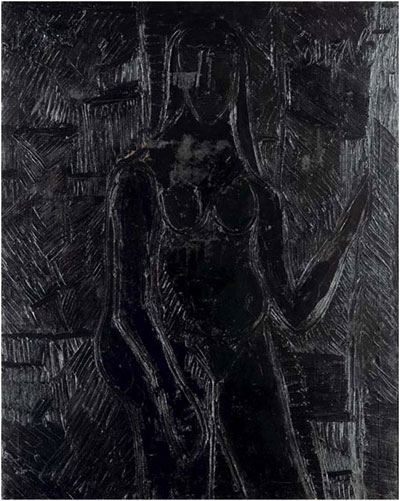 Syed Haider Raza, also an alumnus of Sir J.J. School of Art, Mumbai and co-founder of PAG, was one of the country’s most important 20th-century painters. While in India, Raza experimented with a number of Modernist styles and had his first solo show at Bombay Art Society Salon in 1946 for which he was awarded the Silver Medal. In 1950, he accepted a painting scholarship at the École Nationale Supérieure des Beaux-Arts, and he moved to Paris where he painted French landscape scenes with gestural brushstrokes and an impasto application of paint. Inspired by his European contemporaries such as Cézanne, Gauguin and Van Gogh and began to use colour as a tool of construction, switching from gouache and watercolour to more tactile oil-based pigments. Over time, his landscapes would become increasingly abstract, which contributed to the development of his now-famous unique styles such as Abstract Expressionism and Geometric Abstraction.

By the 1970s, having lost his wife and wanting to reconnect to his Indian roots, Raza became increasingly interested in the Indian motifs, especially the auspicious ‘Bindu’ which started appearing regularly in his paintings from this time. He passed away in 2016, aged 94 leaving behind his incredible body of work for which he received Padma Shri, Padma Bhushan and Padma Vibhushan from the Indian Government and one French Legion of Honour from the French Government. 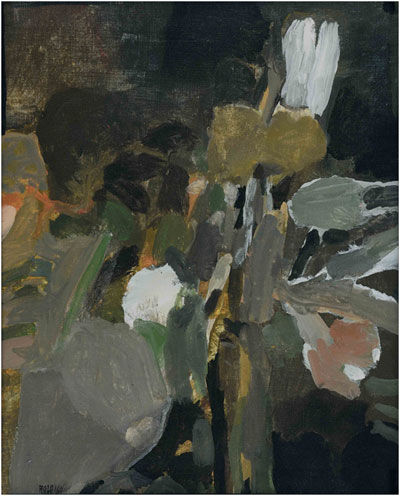 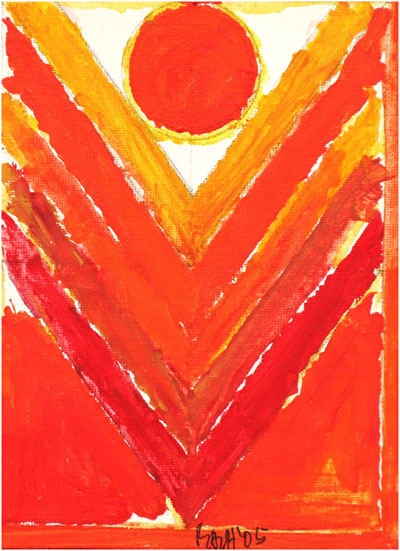 Maqbool Fida Husain is perhaps the most mainstream and controversial artist on our list. Husain was born to an on September 17, 1915, in Pandharpuer, India, to a secular Muslim family. He is best known for his vibrantly coloured paintings depicting horses, urban landscapes, the Bollywood star Madhuri Dixit, nude Hindu goddesses, and working on themes like religion and politics, using historical figures, icons and events. Unlike other artists in PAG, Husain started his career painting posters and hoardings for India Cinema in Bombay. After joining PAG, he followed the steps of his contemporaries - F. N. Souza, S. H. Raza, K. H. Ara et al., and went to Paris in 1953. There he saw the works of Pablo Picasso, Paul Klee, and Henri Matisse and started incorporating Cubism into his style. In his later years, he was awarded the Padma Bhushan (1973) and Padma Vibhushan (1991) and revered as the ‘Picasso of India.’

Even while receiving laurels for his paintings, Husain’s love for cinema did not cease. In 1967, Husain received the National Film Award under Best Experimental Film and the 1st prize at the Golden Bear 17th International Film Festival, Berlin for his movie Through the Eyes of a Painter(1967). He also wrote and directed GajaGamini(2000) and Meenaxi: A Tale of Three Cities (2004). Being the eccentric artist that he was, Husain inevitably got charged with ‘hurting people’s sentiments’ with his representation of mythological figures in political settings. Stirring a rush of controversy over the artistic license, Husain lived in self-imposed exile from 2006 until his death.

The Progressive Arts Group also produced young artists in its later years. Some of the prominent names are V. S. Gaitonde, Krishen Khanna, Ram Kumar, Tyeb Mehta, Akbar Padamsee, and Mohan Samant, as well as Bhanu Rajopadhye Athaiya – the only woman artist associated with the group. These artists collectively leaned into Prime Minister Nehru’s ideology of ‘Unity in Diversity’ and continued on the legacy of the Masters of Indian Modern Art. 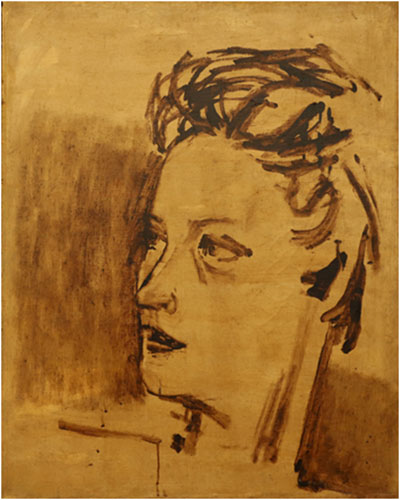