Already have an account?
Home › The Paintings of K H Ara...

A self taught artist, Krishnaji Howlaji Ara is unlike any other modern Indian painters. K H ara is known for coming up with an ‘Indian’ style of art. 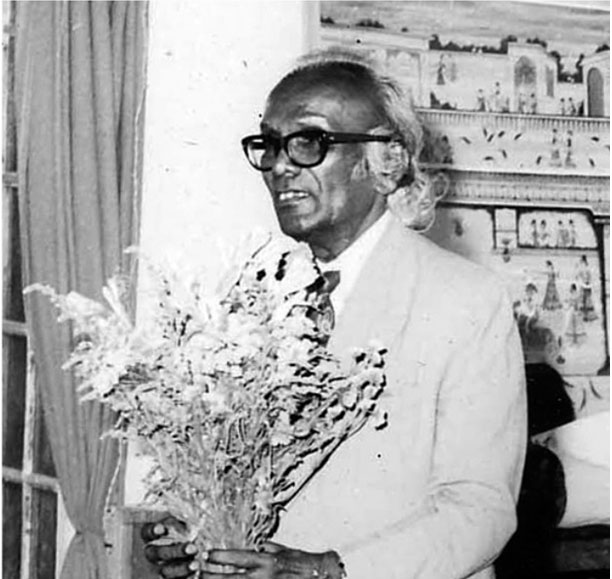 K H Ara was born in April 1914 in Secunderabad, Andhra Pradesh. He was the son of a chauffeur who lost his mother at the age of three. He ran away to Mumbai after his father remarried at the age of seven. He started working as a car cleaner in Mumbai and later as a houseboy at an English household. Ara participated in the Salt Satyagraha during the Civil Disobedience Movement and was jailed for five months. Ara has known extreme poverty and in spite of it, he continued taking interest in art and painting.  He was only encouraged to paint as a profession later by an art critic from the Times of India, Rudy von Leyden who saw his work. Later on, the Editor of the Illustrated Weekly of India, Walter Langhammer got so impressed by Ara’s skill that he had him enrolled at the J.J. School of Art.

Ara started painting landscapes and still lifes first before moving to female nudes. He is recognised as the first contemporary Indian artist to focus on on the female nude as a subject. he early works of Ara were versatile and they were easy stills from life. 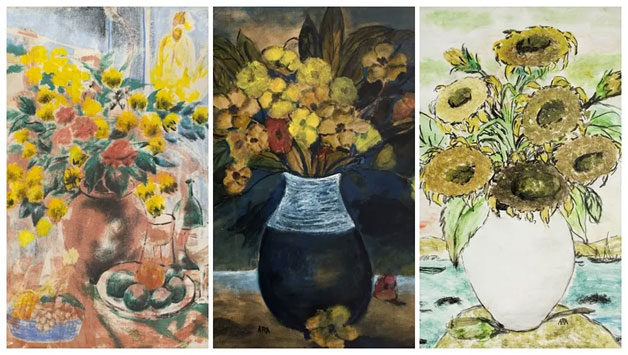 In the various paintings above, Ara’s still life is a combination of landscape and objects. The object is the flowers in a  vase. The vases seem to be standing in the space alone. There is a range of landscape depicted in the background - a window sill, night sky, mountains. The flowers are in full bloom and the colours are extremely vibrant. Ara’s paintings gives an impasto effect which was achieved with the strokes and intermixes of the paints. Though he achieved this impasto effect initially by using watercolors and gouache, he later on moved to oil paints. His artwork reflects influence from French artist, Paul Cezanne. 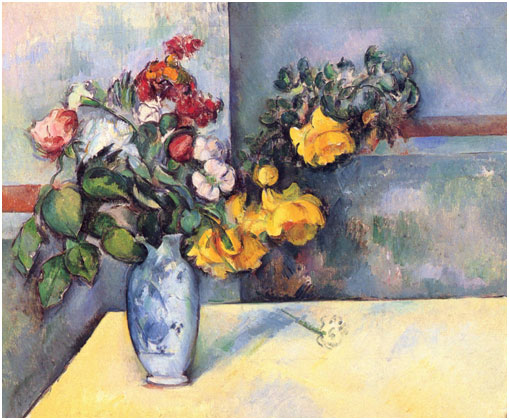 Flowers in a Vase - Paul Cezanne 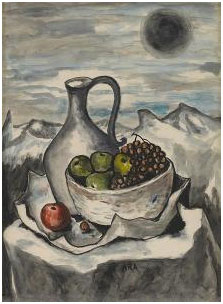 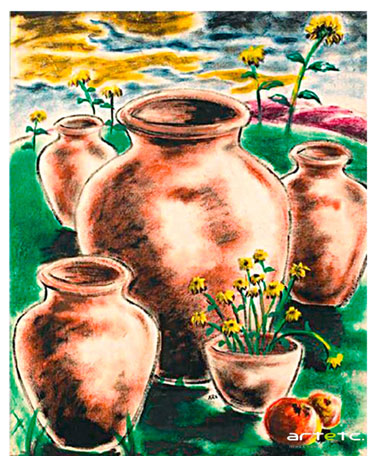 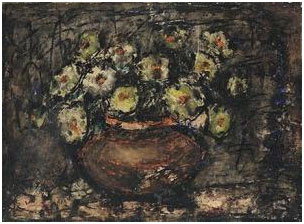 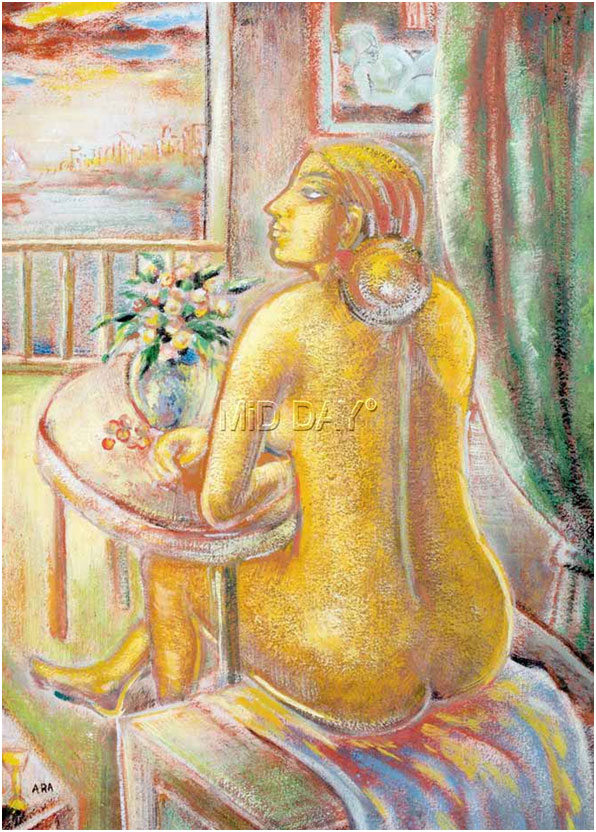 Art critic Nissim Ezekiel had remarked that Ara was the contemporary Indian painter to meticulously use the female nude as a subject.  Kekoo Gandhy organised Ara’s debut solo show in 1942. The show was a sell out and he made Rs 2,000 (a large sum at that time) from it. He went on to win the Governor’s Medal for one of his works in 1944. With repeated success, he gained the attention of his contemporary artists and joined the Progressive Artists’ Group in 1948, which included fellow artists such as M F Hussain, F N Souza, S H Raza, among others.

Ara’s nudes are far from vulgar and they are sensuous and simple. It would infact seem that his subjects were shockingly comfortable with their nudity. Ara’s nudes don’t face the spectator. They are absorbed in their own world busy doing various activities. They are mostly brooding, lying down comfortably, dark skinned and never posed. There is a mix of rawness and refinement in his paintings. 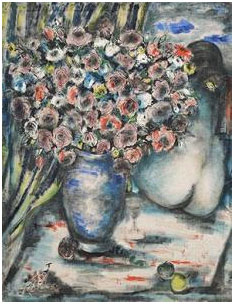 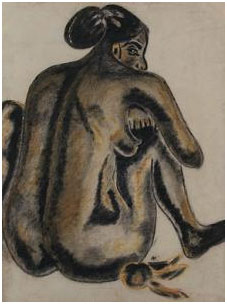 Watercolor and charcoal on paper 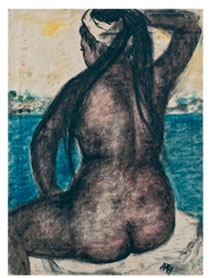 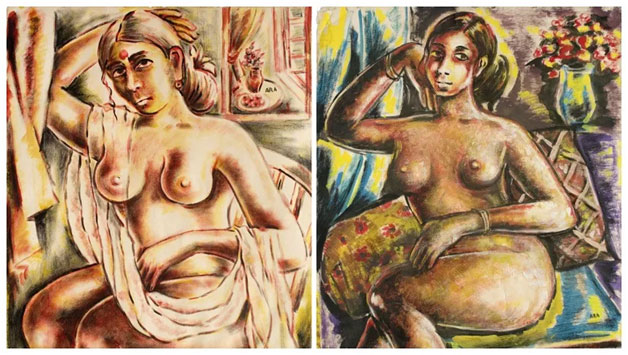 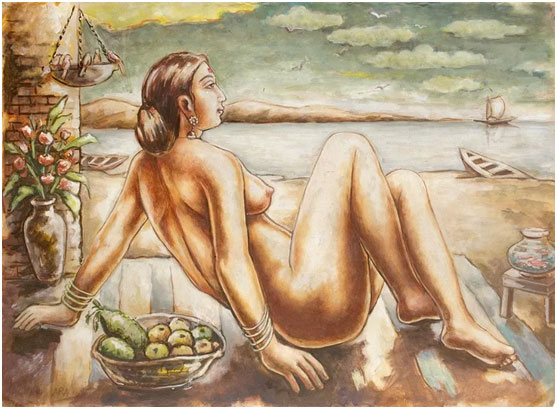 The main category of his work are other depictions. These are only a few in number but significant. There is an ensemble of figures located in the everyday situations of people in their authentic selves. None of the figures are posing for the artist rather they are painted again as still life. It could also be said that these depict broken fragments from life. Jehangir Sabavala have said that, “Ara painted with this heart, not with his mind.” 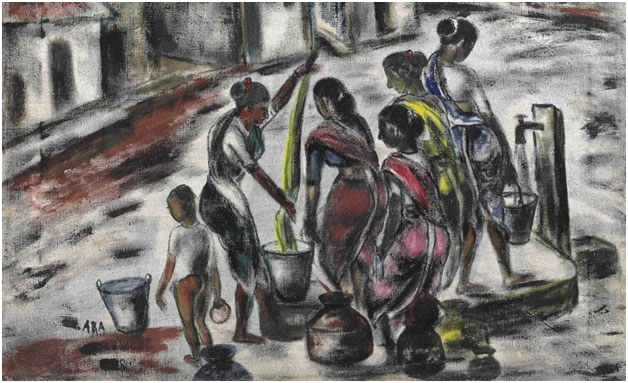 Over time, Ara exhibited less and devoted himself to the Artists’ Centre. Hence, moving away from the public eye, unlike his fellow artists. As an artist coming from nothing, he was involved at such a level of helping other struggling artists that he used his personal funds for them. This led him to a difficult financial situation in his later years. Ara’s habit of giving away his works generously did not help his situation either. Ara depicted the socio-historical themes within the limits of naturalism. There has been a renewed interest K H Ara’s works.  His art depicts the pleasure of ability of expression. Ara was notable for developing an 'Indian' style of art in his own artistic idiom. He died in 1985 and his artworks remain alive in his legacy.  Prof. P.A. Dhond when writing on then contemporary Bombay group, says: “Ara amongst them was a completely different artist. With his hair outgrown and tied in a bun on his neck and unruly strands over the years, he still resembled his car cleaning days. Somehow his troubled life when young left permanent marks over his personality........even today if you meet Ara, you’ll find him carrying someone’s kids over his shoulder, if you ask, he would reply that they are his.”