The puppetry tradition of India is an integral part of the Indian performance tradition. Puppetry show includes pictorial story depiction using puppets, live music, gestures, and narration. Hence, they are at the crossroads of storytelling and theatre plays. It has been performed generally at the religious events, ceremonial events and temple festivals. 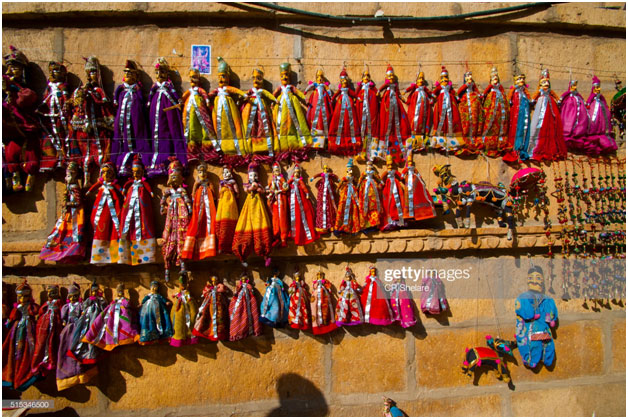 It cannot be located when the tradition began historically. However, there is one myth which says that, the creator Brahma gave life to the adi, the first nat puppeteer, and created the first puppet for the entertainment for his consort goddess Saraswati. Not satisfied with his work, Brahma banished the puppeteer to earth, starting the line of nat bhatt puppeteers. According to literary sources, the earliest reference to puppetry has been made in the Mahabharata, 9th century B.C.E. Other literary sources include Panini’s grammar (4th century B.C.E), Patanjali’s texts (2nd century B.C.E). Some scholars also argue that puppetry was there before the theatre. The puppet performances present stories of Gods and epic heroes using epic poetry and narrative theatre. They perform both the function of education and entertainment. As a popular medium of performance, it has been present all over India. India is home to a diverse range of puppet traditions.

All the archetype of puppets is found in India, which are: hand or glove puppets, rod, string and leather or shadow puppets.

i) Glove puppets- The rod puppets are manipulated directly by the puppeteer’s hand in audience view. They slip over the puppet figure into their hands and for this reason, are also called hand puppets.

Glove puppets of Orissa are called Kundhei-nach (kundhei = doll; nach = dance). Radha Krishna theme is represented in the pictorial arts as well as performance arts of Orissa. In Kundhei-nach, there are two puppeteers, representing Krishna and Radha. While manipulating the puppet, the puppeteers also sing and play the dhol (folk drum). 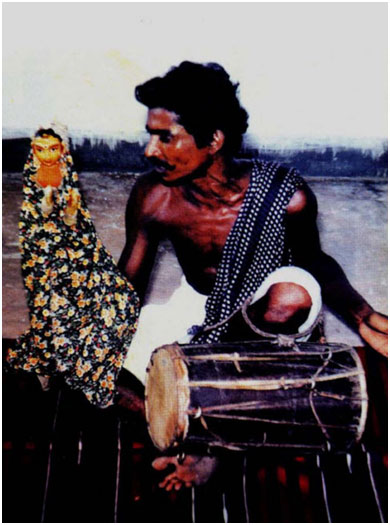 In Kerala, glove puppetry is called Pava-Koothu (pava = doll; koothu = dance). Since the puppets are so similar to the headdress worn by Kathakali performers, it is also called Pava-Kathakali. Three or four puppeteers perform in view of the audience. 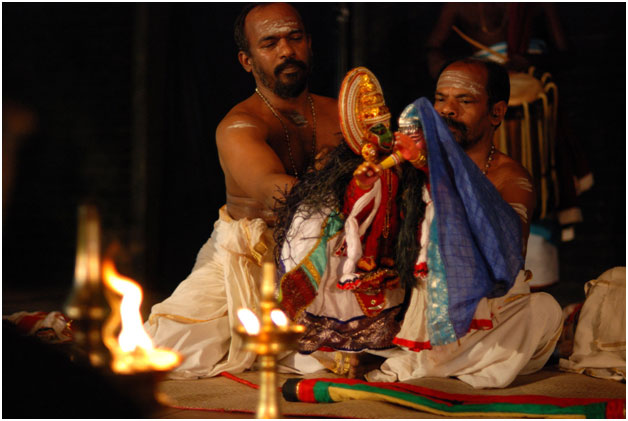 ii) Rod puppetry- Large puppet figures are manipulated by the use of three or four feet high rods. It is found only in Orissa and West Bengal.

Orissa’s rod puppetry is called Kathikundhei-nach (rod doll dance). The puppeteers manipulate the puppets from below while sitting. The puppets are around 12 to 18 inches in height. The stories of Durga and Ramayana are performed typically. 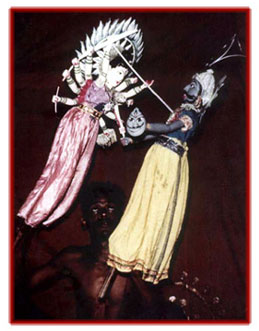 The rod puppets of West Bengal are called Putul-nach (putul = puppet; nach = dance). The puppet figures are adorned in Jatra costume and the play scripts of Jatra is performed as well. Tamil Nadu and Karnataka have a curious puppet tradition which has both rods and strings. While the rods are attached to the hands of puppets, manipulation is from above like that of the string puppets. 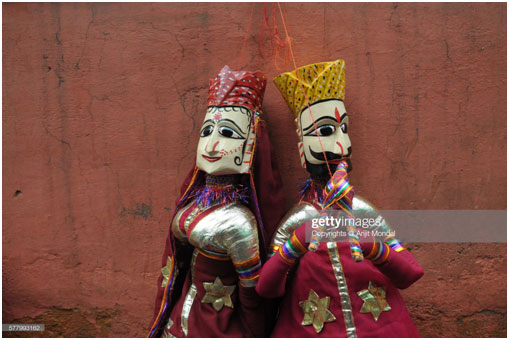 Kathputli (wooden doll) performance of Rajasthan is the most prevalent string puppetry. The figures are carved from wood, and the hands are made of stuffed rags. The puppets are dressed in elaborate costumes and one particular factor is the long skirts. These long skirts disguise the fact that they have no feet. They are performed in the one-play form. The puppeteers speak through a reed made of bamboo called boli (speech) which function as a speaker. This makes the puppeteer’s voice a high pitched one. Two strings manipulate the Kathputlis. It is in the case of Rasdhari (dancer) that the Kathputli has nine strings attached to portray dance-acrobat style movements.

iv) Shadow puppetry- This kind of puppetry is particularly practised in south India. The puppets are placed behind a screen and the puppeteers create variation in the density of shadow cast by the puppets by changing the distance from the screen. 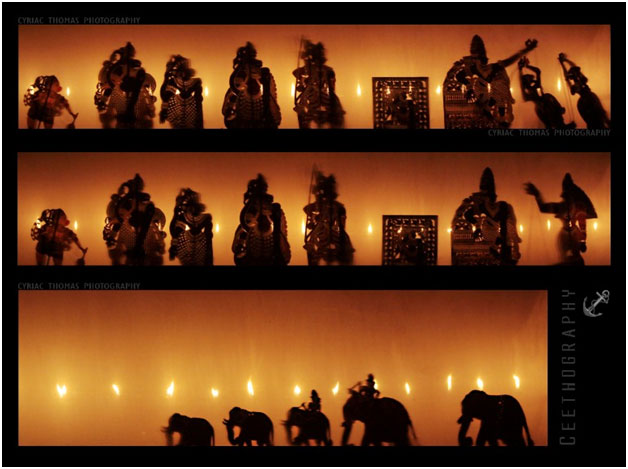 The shadow puppetry of Kerala is called Toalpava Kuthu (leather doll dance). These puppets are opaque and throw black and white shadows. The Tamil Ramayana, Kamban is performed. It is linguistically unique because the Tamil text is performed for a Malayali audience by Marathi performers. 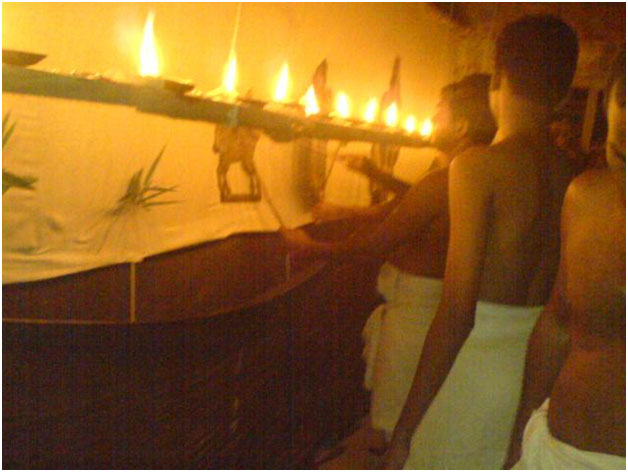 Behind the Screen of Tolpava kuthu performance, Source : Flickr

In Andhra Pradesh, the shadow puppets are called Tolu Bommalatta (leather puppet dance). The puppets are translucent, and the shadows are in various colors. The Andhra leather puppets are the largest, most of them are human sized actually. It is the only puppet tradition which presents stories from Mahabharata. The shadow puppets of Karnataka is similar to Andhra Pradesh, and they are called Todale Gombe-atta. The shadow figures here are both large and small sized. The small figures are called chikka and are also translucent and throw shadows in various colors.

The disappearance of puppet tradition began with the beginning of the colonial period. In the post-colonial period, the high-speed modernization wave that invested India put many of the puppetry traditions at risk of extinction. Therefore, government and private initiatives were taken to revive the form. Various organisations were set up to promote the puppet tradition as well as to pave the way for modern puppetry.

The role of some individuals is noteworthy for their contribution to maintaining puppetry in modern times. In 1950, Raghunath Goswami established his Putulpuri studio (now The Puppets) in West Bengal where the first puppetry event was held. The event combined diverse types of puppets. Madhulal Master founded the Indian Institute of Puppet in Bombay. In Udaipur, Devilal Samar founded the Bharathya Lok Kala Mandal Centre, bringing together a museum, a school, and a puppet theatre.

The birth of modern troupes and the opening to the international scene created new contexts for traditional puppetry to flourish. In 1960-1961, four Indian puppeteers, Suresh Dutta R.N. Shukla Rahi, Dilip Chatterjee, and B. Sahai, studied for a year at the Central Obraztsov Puppet Theatre of Moscow. On their return to India, Suresh Dutta founded the Calcutta Puppet Theatre, where an entire generation of puppeteers was trained in the epic Russian style of rod puppetry.

Thus, new styles of puppetry emerged and shaped into a redefined urban puppet theatre. Several puppetry festivals also started being organized to offer stage to both traditional and modern puppet troupes. Hence, puppets remain a socio-cultural document, the cultural text of the times. 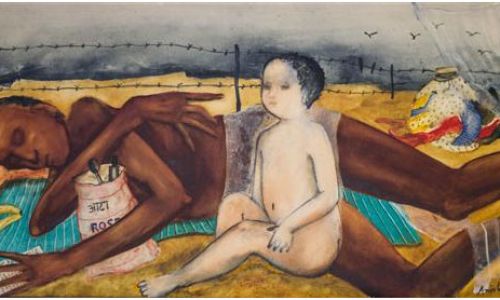 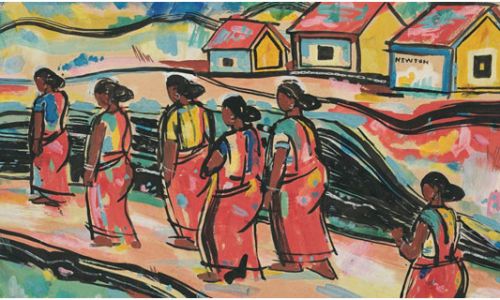 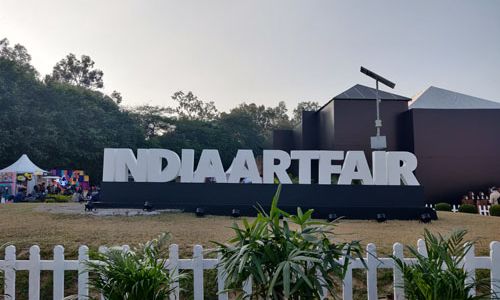 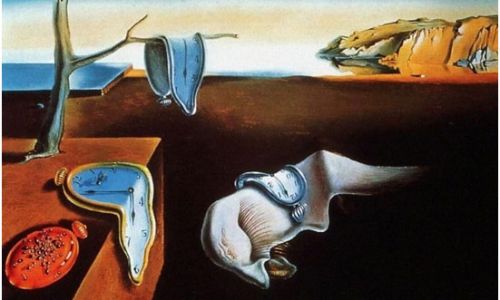 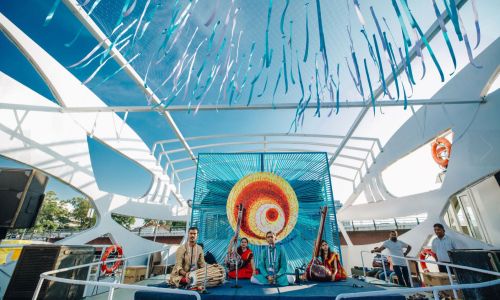 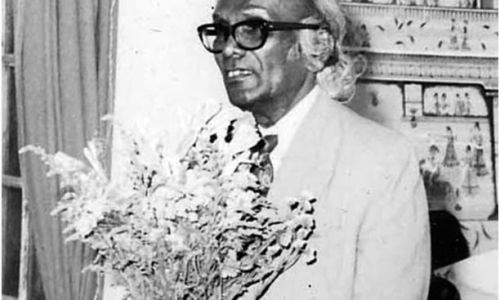 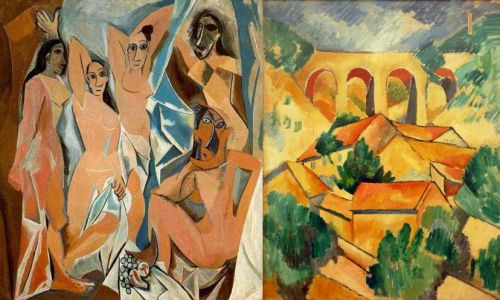 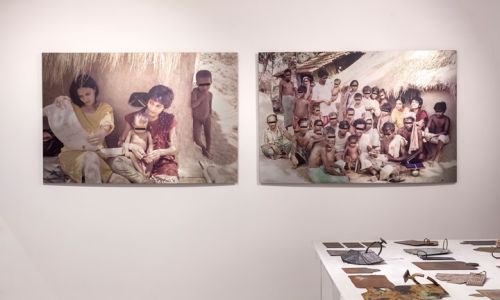 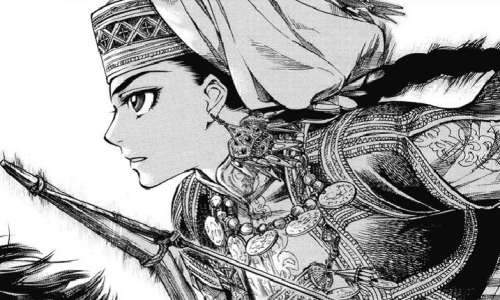