Born in 1933 at Khaour district ( Pakistan ), Parshotam Singh is specifically known for his musician series. With his intrinsic knowledge of the myriad moods of Indian classical music and lyrical depiction of the various tones and undertones of the spirit of music, Parshotam Singh was in a league of his own.

He also met well known artists of sixties and seventies, eighties and nineties. His closeness with figurative artist like Almelker, Jyoti mathur, Hussain etc further nurtured his work and creativity.

Parshotam Singh’s musical series become his identity for whole life. The artist, by painting both male and female musicians has produced some very fine canvases that are a visual delight. Sarod, sitar players are deeply absorbed in their music creation and soul wrenching effort to bring out what would sway and absorb other souls in the creative activity. These moving images have marked the emotive quality of Singh’s works. And by looking at his works, one can feel the kind of sadhna and dedication that goes in the pursuit of music. Such is the power of his works that he manages to paint the soul of the musician.

Back to Artists View Artworks of Parshotam Singh 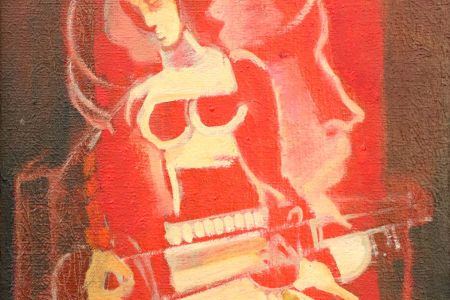