C. Douglas View Artworks of C. Douglas Back to Artist

C Douglas was born, 1950 in Tellicherry, Kerala. He secured a Diploma in Painting from, Madras School of Arts and Crafts in 1976. Douglas’s works are today part of several collections and he has been winning a steady stream of awards, including the Tamil Nadu state and the National Award for painting (1992), Government of India’s Junior Fellowship (1991-1993) and Senior Fellowship(1994-1996); From 1981 to  1988 , Douglas worked, lived and exhibited in Munich, Germany, at the Haus der Kunst and many other cities in Germany. He returned to Cholamandal in 1989, In 1994, Douglas went on invitation to the European Ceramic Centre at Hertogenbosch, Holland, to explore the ceramic medium and has held a few exhibitions of his work. He also received the Charles Wallace Trust Fellowship the same year. He lives and works from Cholamandal Artist’s Village, Chennai.

C.Douglas is a painter who combines sarcasm with aesthetics. Thematically oriented, his works often mock at the base faire. They break the pictorial bounds- rules, rhyme and reason for making a valid, forceful statement. Sometimes he goes to the extent of absurdity to make his point.

1971-76 Diploma in Painting, Government College of Arts and Crafts,, Chennai

2008 'From Beyond The Vindhyas', Ganges Art, Kolkata

Back to Artists View Artworks of C. Douglas 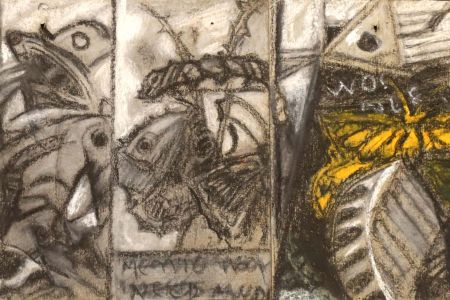