Biren De View Artworks of Biren De Back to Artist

He was a painter whose works were a manifestation of the cosmic energy, rather the inner consciousness. He chose to give expression to this universal inner consciousness via colour, light and patterns rather than directly exploring or portraying the material world in his works.

The legendary artist Biren De was born in 1926. He studied at the Government College of Arts and Crafts, Kolkata. He finished his graduation in 1949. Biren De spent in later years travelling extensively in New York and other parts of the world. His travels enriched his artistic expression with new forms and idioms.

The artist oscillated between deep blues and blazing reds, his final aim being reaching an undivided consciousness. And his works were an exquisite embodiment of that inner consciousness that remains elusive for most. So for Biren De, it wasn’t the external world of concrete objects and human beings that was fascinating as such. What moved him deeply was the supreme divinity of human consciousness. And that he tried to capture in his works.

He was a Fulbright scholar to the U.S.A from 1959-1960. During his time there, he painted numerous portraits of distinguished persons. He spent the following year living and working in New York. He exhibited his works at many major art exhibitions in India and abroad including Salon de Mai, Paris and Venice Biennale.

1963-64 ‘Ten Contemporary Painters from India’, Travelling exhibition to the USA.

2008-09 ''Modern India', organized by InstitutValenciàd'Art Modern (IVAM) and Casa Asia, in collaboration with the Ministry of Culture at Valencia, Spain

Back to Artists View Artworks of Biren De 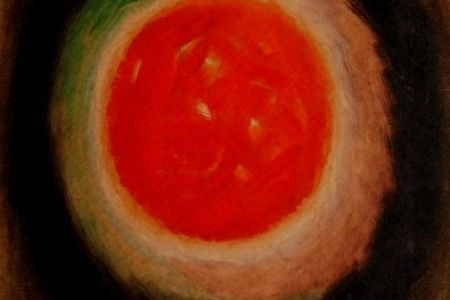