Amrita Shergil came in at a time when the scene in Indian painting was vastly dominated by the Bengal School of Art represented by the likes of Abindranath Tagore and Jamini Roy.  The school marked the distinct fusion of classic Indian painting style with modern aesthetics. By and large, the focus of the school was not to copy the west but to look back at Indian culture for inspiration and style. Amrita furthered the aesthetics of the Bengal School by merging Indian and European sensibilities in her work. Influenced by Indian art forms such as miniature art and the Ajanta – Ellora cave paintings, Amrita Shergil revolutionized Indian art in the way she blended the outlines of ‘modern European painting’ with primitive forms. She fused the aesthetics of Indian cave paintings with the techniques of oil painting she had learnt at Paris.

Amrita Shergil was born in Budapest in 1913 to a Sikh aristocrat father and a Hungarian opera singer mother. Her family moved to Shimla in 1921, where Amrita was first home schooled in art by Major Whitmarsh . She later joined classes to study painting in art classes held by an artist named Beven Pateman. Following encouragement from her Hungarian uncle, Amrta, alongwith her sister and mother, travelled to Europe to continue her education. In France, she was enrolled at the Ecole Superieure des Beaux Arts where she studied the academic style of painting, becoming the youngest artist and only Asian to be awarded a gold medal and election as an Associate Member to the Grand Salon.

Known mostly for her poignant portraits of Indian women, Amrita Shergill is known to have travelled all over India, looking for her women subjects. Works such as Bride’s Toilet, Three Girls, The Child Bride and Tribal Women evoke a poignant world of rural Indian women in bright, colourful clothes, seemingly passive and devoid of an agency through their demeanour but the very passivity of the body language and the quiet, brooding but interrogating eyes questioning the status quo, as it were. There is something detached and dreamy about Amrita’s works, a characteristic that lends her paintings a certain enigma. There is a quiet melancholy in the works, almost lyrical but the portrayal is never complete, somehow something is left of that reality for the viewer to fill the gaps in. It is like the painter is half outsider, half insider trying to gaze into the veins of a society, much like Amrita Shergill’s hybrid cultural roots.

2013 Celebrated as the Birth Centenary Year of Amrita Sher-Gil. UNESCO Hungary declared 2013 as the International Year of Sher-Gil

2013 Exhibition of Amrita Sher-Gil and Hungary at the Vaszary Villa, Balatonfured, Hungary

1976 Declared a ‘National Art Treasure’ artist by the Archaeological Survey of India, Government of India

1968-69 Films Divison of India produces a documentary film Amrita Sher-Gil, based on the life and works of Amrita Sher-Gil (Director: B.D.Garga; Duration: 19 minutes)

Back to Artists View Artworks of Amrita Sher Gil 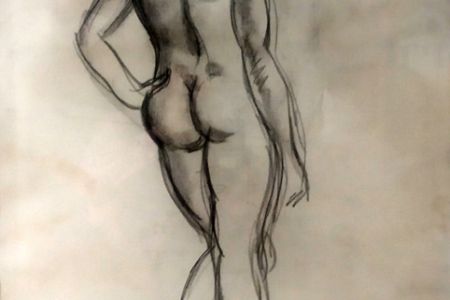