Artist Schandra Singh is a first generation American born in New York to immigrant parents. She is the daughter of Anand Singh, an Indian Maharaja and Gisa Singh, an Austrian model. Born in 1977 in New York, Schandra Singh secured a Masters in Fine Arts from the Yale University School of Art in 2006. Prior to this, she had completed a BFA Hons from Rhode Island School of Design in 1999.

The artist uses the medium of oil and gauche to talk about present socio-political realities. Her style is varied. At times, the work blending of imagery: towers into people, roses into founding fathers. At other times the work is a pure expression of a situation. As an artist with a mixed cultural heritage from India and Austria, Schaandra Singh uses the storytelling mode of Indian miniature painting juxtaposed with inspirations of neo-expressionism.

Schandra Singh has had solo exhibitions in New York, Geneva and Berlin. Her works have been a part of prestigious group exhibitions cross the world.

She lives and works in New York.

Back to Artists View Artworks of Schandra Singh 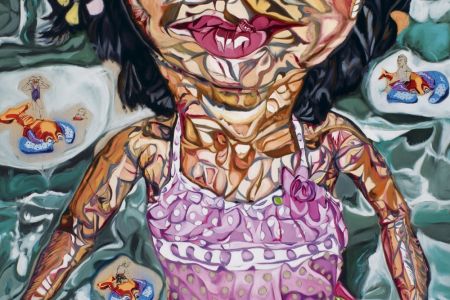