Mumbai based Narendra Yadav is a conceptual artist whose works are engaging, thought provoking and use interesting props both from the world of everyday objects and the fantastic world to create compelling, gigantic installation like artworks that are critical commentaries on the socio-political realities of our times.

Born in Ratnagiri district of Maharashtra in 1964, Narendra Yadav holds a B.F.A. in Applied Art from J.J. School of Art, Mumbai (1997 ). His object and video-based works successfully straddle conceptual art, sculpture and installation.

Narendra calls himself a ‘weekend artist’, as he has a day job for an advertising firm. The process of creating conceptual art is somewhat similar to the process of creating television commercials, the obvious difference however being that you don’t have that kind of artistic license and freedom to voice your viewpoint in a television commercial as the prime motive there is to sell a product. The artist frequently uses religion, mythology, Indian culture and other concepts in his art to satirically comment on various socio-political events shaping the country. By his own confession though, he keeps the criticism subtle as he doesn’t want to hurt anyone’s sentiments.

He has had three consecutive solo shows at Gallery Maskara in 2009, 2010 and 2012. His first solo show in 2006 was at the Museum Gallery, Mumbai and he has shown previously at Sakshi Gallery, Mumbai (2007), Lalit Kala Academy, Kerala (2006 and 2008), Gallery Maskara (2008). In 2010 - 2011 he was part of a group shows at Artissima 17 (Art Fair), Turin, Italy and the India Art Summit. In addition, his video work Stress Release Toys for Instant Justice was part of Commercial Break and was screened at the Nuit Blanche Festival, New York and 54th Venice Biennale. In 2012, Yadav also participated in group exhibitions at the India Art Fair, New Delhi and the VIP Art Fair, Online. In 2013, Yadav’s work is featured in the group show TraditionsTransformation at gallery Geukens & De Vil, Antwerp, Belgium. In 2014 Yadav participated in the India Art Fair, New Delhi. In 2015 the artist realised a time-based live moon project titled My Lunatic Instinct at Gallery Maskara and was part of the group exhibition titled Gopakapattanam, Museum of Goa, India.

The artist lives and works in Mumbai, India.

Back to Artists View Artworks of Narendra Yadav 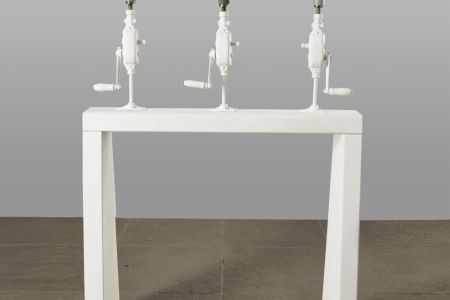