Born in 1933 in Ulpur (now Bangladesh), Sarbari Roy Chowdhury graduated from the Government College of Art and Craft, Kolata in 1956. He further studied under sculptors Prodosh Dasgupta and Sankho Chaudhuri at the M.S. University, Baroda. The artist also served as the Head of the Department of Sculpture at the Indian Art College Kolkata between 1960 and 1962.

Sarbari Roy Chowdhury is known for the unique mode of expressiveness that enters his works even though the works are pictorial in nature. His sculptures embody an eclectic sytntheis of the academic realism of the East and the more innovative cubism and abstraction of the West. Deeply influenced by Hindustani classical music, Chowdhury also explored the abstractive element of music through his works. Infact, music inspired him so much that he sought to create a visual language, a vvisual syntax for music thorugh his works. A lot of influence on his style can be credited to his visit to Academia de Belle Arti, Florence in 1962 where he met Giacometti and Henry Moore in person.

Surbari Roy Chowdhury won several awards including the Gagan – Abani Puraskar from Visva Bharati University, Santiniketan in 2004 and the Abanindra Puraskar from the Government of West Bengal in 2005.

He has exhibited his work widely at both solo and group shows in India .

2008 '‘Rhythm: A Visual Harmony', organized by Esperance, at the Academy of Fine Arts, Kolkata

2005 ‘Abanindra Puraskar’ by the Government of West Bengal

Back to Artists View Artworks of Sarbari Roy Chowdhury 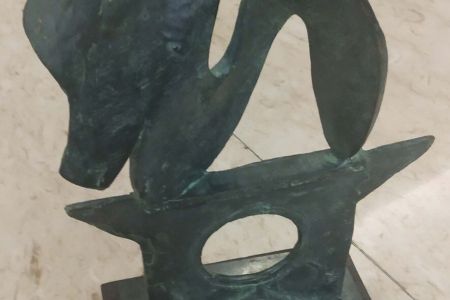