A contemporary Indian painter and sculptor, Jagannath Panda creates intricate art that becomes fascinating point of synthesis between the mythological and the technological. The mythological undergoes a sort of an avant garde transformation in his work as he fuses the mythological with elements from contemporary pop culture to create stunning and compelling works that are truly contemporary in their sensibilities.

In his detailed mixed media paintings, drawings and sculptures, Panda mixes motifs from traditional Indian art with images from western and Indian contemporary culture. These hybrid works often investigate the effects of globalisation and the resultant impact of the mainstream model of development that a country follows. So, even though the imagery and the style might seem fantastic and somewhat surreal, the works are very much rooted in reality as they try to convey the tensions inherent in the country’s socio-economic transformation and its foray into a globalised and a modern universe, so to say. He often humanises animals to become part of this seemingly ambiguous universe that he creates.

Jagannath Panda has had numerous solo shows in India as well as in world cities like London, Tokyo, San Fransisco, etc. He has also participated in group exhibition across the country as well as abroad. 1990 he won the Lalit Kala Akademi Award, and was also honoured with the All India Fine Arts and Crafts Society Award, New Delhi, in 1996.

2007 ‘Nothing Is Solid’, Gallery Chemould, Mumbai

2009 'Astonishment of Being', Birla Academy of Art & Culture, Kolkata

2005 ‘Are We Like This Only?’, Vadhera Gallery at Rabindra Bhawan, New Delhi

2011-12 'Indian Highway', in collaboration with the Serpentine Gallery, London and the Astrup Fearnley Museum of Modern Art, Oslo at MAXXI: Museum of XXI Century Arts, Rome

2009 'Beyond Globalization', Beyond Art Space, Beijing

Back to Artists View Artworks of Jagannath Panda 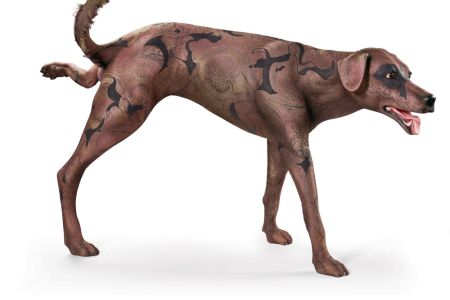