More About "A .P. Santhanaraj" Artist

An artist whose works evoke the spontaneity of emotional intensity merges seamlessly with the studied preciseness of technique, the rhythmic contours of abstraction come intertwined with the elements of classical Indian art, AP Santhanaraj is most widely known for distinct quality of line in his works.

Born in 1932 in Tamil Nadu, AP Santhanaraj, one of the greatest stalwarts of Indian art, received his Diploma in Painting from the Government School of Arts & Crafts (Madras) in 1953. He later also taught at the same school he passed out from. He finally retired in 1990 as the Principal of the same School.

The artist, in his creative process privileged substance of thought over the mere mechanical application of technique. Another distinct facet of Santhanaraj’s artistic oeuvre is his expertise in portraiture, both painting and sculpture. His portrait sculptures of Birla at the sky theatre of the planetarium and Karumuthu Thiagarajan Chettiar at the bank of Madura were well appreciated.

AP Santhanaraj is equally well known for his unique mode of painting. His paintings began with the placement of random pieces of paper on canvas. These are moved around the pictorial space while the canvas itself is intermittently rotated and inspected from all angles.

He was commissioned to do frescoes for the Lok Sabha and the Madras High Court.

His works have been represented in several public collections including the National Gallery of Modern Art, New Delhi.

The artist passed away at Chitlpakkam near Tambaram in May 2009.

Focus Art Gallery in Chennai held a posthumous exhibition called ‘The Indigenous Line : Works of AP Santhanaraj’ in Chennai in 2011. His works have found a place of pride in prestigious collections.

Back to Artists View Artworks of A .P. Santhanaraj 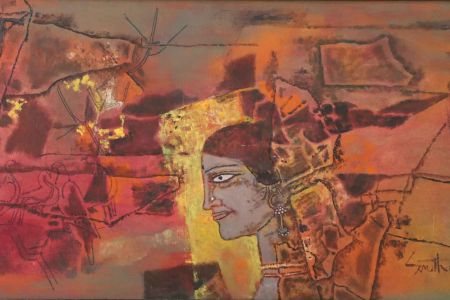