Ved Nayar View Artworks of Ved Nayar Back to Artist

Ved Nayar was born in 1933 in Lylallpur (pre partition Punjab). The partition uprooted his family and they shifted to new Delhi. Nayar completed his graduation from St Stephens College, Delhi University in 1952. He further went onto receive aa Diploma in Fine Arts from College of Art, Delhi.

Ved Nayar was initially a painter but he gradually expanded his oeuvre to explore other mediums like sculpture, installation, photography and printing in his works. Environment has been a major source of influence over his works. His earlier works showcase his intimate and symbiotic relationship with the forest that he developed during his childhood. His earlier works were made of abstract derivations and ritual symbolism. But later, the works developed into an iconic figure of the elongated human form, mostly a female, that inhabited a space between the heaven and earth.

Ved Nayar’s art is critical in its outlook. His artworks are subtle commentaries on future. He uses the trope of nature and human to alert us to the problematic dynamics of mass consumerism and cultural globalisation

The artist has participated in many exhibitions and workshops. He won the Lalit Kala Akademi Award in 1981. Ved Nayar lives and works in New Delhi.

Back to Artists View Artworks of Ved Nayar 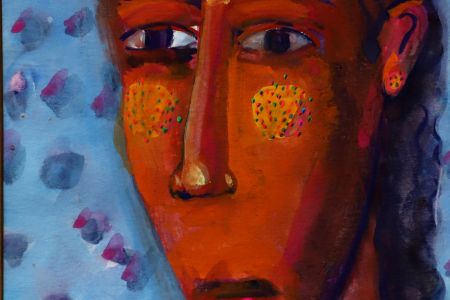